I’ve written several chapters over the last few days, although none of them are refined enough to give a sample.

What I’ve also been working on, and what has kept me up until 4am, is this image of how I think the sky might look on Refuge about 2/3 of the way through second day.  If the concept of second day is confusing, remember that Refuge has a 26+ hour night, followed by roughly a 12 hour first day, then it passes behind the shadow of Ember (seen in the picture in the sky) and has a shortnight as it passes through the shadow.  Then it emerges for second day, approximately 12 hours long before entering longnight once again for 26+ hours.

I give you Refuge, with it’s green skies due to an orange dwarf star as a primary light source instead of a yellow dwarf star like ours.  I may still not have the color right, it might be a more blue green.  The nitrogen still would scatter blue most strongly, after all.  But the light would be dimmer, as Oasis (the K4 orange dwarf) would be dimmer than the sun at the distance Refuge is from the star.  So the days would be darker.

Overhead is Ember with its raging internal heat blasting through clouds of sodium and potassium. 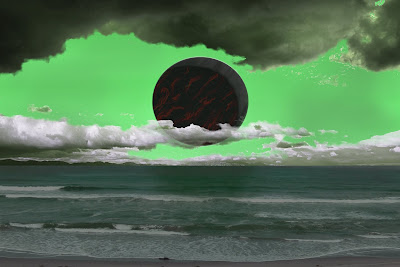 Ok, here is what I think is the final rendition of this photo.  I’m a bit burnt on writing right now, so next I’ll be designing the look of the Michael Stennis. 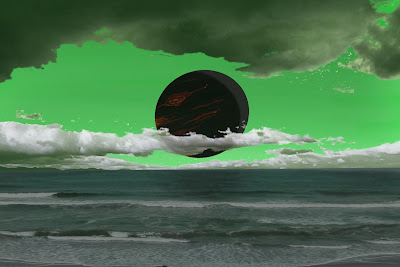 View all posts by: Damon Alan